We hear a lot these days about public sector salaries exceeding their private sector equivalents. A lot of those stories are about federal employees and they are being refuted along the way by other organizations, as you can see in this Washington Post story.
Our concern is the public’s perception about the salaries and benefits of public employees at city and local levels (counties or special districts). We find that comparisons at these levels are difficult to make.
For instance, there are no private sector animal control department positions, so how would you compare those salary scales? We don’t know. And there are a lot of similar type of city positions that would not compare well in an honest apples-to-apples sampling to private sector equivalents.
But what we do know is that there are a few jobs in public employment that do have some comparisons in the private sector. Take for example city attorneys:
The city of Houston, currently the fourth largest city in the United States, provides a spreadsheet on the salaries of its employees here. We used that information to do a little number crunching for the salaries of city attorneys. As you can imagine, there are many levels of city attorneys in the fourth largest city in the United States, all with very specific job descriptions and qualifications criteria, a situation which really defies our capabilities for pure apples-to-apples comparisons with private sector attorneys. The work is different.
But if you consider that the highest paid city attorney position has a salary cap of $221,338 it's pretty easy to guess that this person is making far less than they would in the private sector. There's no doubt that the Houston mayor engages in a pretty exhaustive search for an attorney best qualified to advise and litigate for the fourth largest city in the country. It’s our guess also that the person is very qualified from a legal perspective, has a long record of success in either private or public sector, and is capable of handling very high profile matters in the courts and in the political arena.
So what would a person of that stature earn at say, Vinson & Elkins, or Baker Botts or Giuliani LLC? The Glass Door website, where people can anonymously report their salaries, reports that a first year attorney at Vinson & Elkins receives $160,000 and 8-year “veterans” receive $249-271,000. That’s not too hard to imagine as true. We can only guess that partners earn well in excess of $500,000 per year. Compare that to ranges in the chart below, which shows the pay scale for all the levels of city attorneys in Houston: 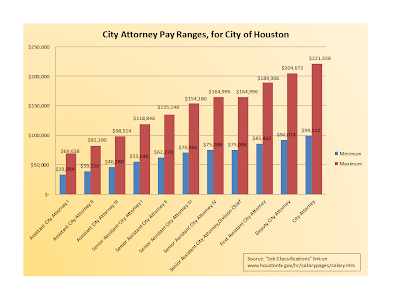 So essentially, based on the chart, attorneys who choose public service know that they will earn much less in comparative pay to those who go into the private sector.
If a top notch attorney has the option of spending ten years at a V&E, earning $5 million in salary or the city of Houston, earning $2 million over that time, which organization will attract the best attorney? The public sector employer is asking the person to forego up to $3 million  in earning potential. That same dynamic plays out for every single person represented on the chart. What is the proper level of compensation for those persons for their retirement?
We don’t really know the answer to that question, as it is something that the city and V&E would work out with the person. But the contrast in private sector versus public sector employment salary ranges and their effects on a person’s retirement security are fairly obvious – it’s better to be in the private sector!
As a final note, the city attorney for Houston is currently David Feldman, a former partner at V&E and managing partner of his own firm, Feldman, Rogers, Morris and Grover, LLP. It’s easy to assume that Mr. Feldman did not take the City Attorney position to make money, or to earn retirement benefits. He did it out of a sense of duty for service to his city. Which is a calculation that most public employees make as well, despite the sacrifice. – Max Patterson
Posted by About TEXPERS at 10:12 AM No comments:

We were digging around the Employee Benefit Research Institute site the other day to see what they offered in comparing public sector and private sector retirement benefits in terms of total compensation.

In case you don’t know them, the Employee Benefit Research Institute is a non-partisan research organization that uses a wide range of research and data to compile reports about retirement benefits in the United States. The EBRI Founders are executives from some of America’s leading companies for executive recruitment and compensation – they aren’t pushing political agendas. Thus we encourage those of you who are serious about understanding the trends and dynamics surrounding pensions in the private and public sector to spend a lot of time on this site.

Anyway, in our search for comparison data, we could not find one particular study that directly answered our question. But in rooting around we saw that the January 2009 study, “Where – and How Much – Do Employers Spend on Compensation?” had data showing how much employers spent on their employees’ total compensation for the past four decades through 2007. The study went one step further and broke out the retirement benefits paid by private and public sector organizations.

We did a little number crunching ourselves by pulling the gross retirement benefit numbers paid for employees by state and local governments and comparing them to the retirement benefits paid by private employers. The key was calculating the rate of increase for each by decade. (Comparing the dollar amounts themselves wouldn’t really meaningfully demonstrate anything due to the differences in size of the private and public sectors.)

So what did we find?

Private sector employers have increased their spending on retirement benefits (excluding Social Security) at a faster rate of growth in three of the last four decades (through 2007).

Our number crunching effort can be seen in the chart below. Pay particular attention to the rate of growth figures. 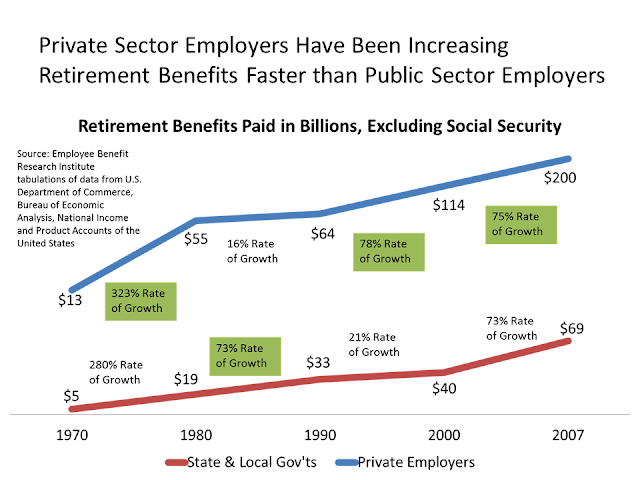 What should we make of these numbers?

Well, they disprove the notion that the retirement benefits paid to state and local government are excessive by comparison to the private sector. They simply aren’t, and they haven’t been.

These numbers indicate the opposite, that state and local government employers need to do more to keep pace with private sector employers for retirement benefits that attract quality employees!

We doubt that cities will want to hear that as they struggle with their budgets during this economic downturn, but these numbers take steam out of the politically fashionable argument du jour that since the private sector is doing it the public sector should be doing it too. – Max Patterson
Posted by About TEXPERS at 10:32 AM No comments: