Cities have been under fire these last several years because there is the perception that they pay a disproportionate amount of yearly revenues to the retirement benefits of employees.

TEXPERS has been fighting this assertion on many fronts, but it’s nice when a third-party organization undertakes a major research project and adds some perspective to the issue.

The Center for State and Local Government Excellence released a study today, “Gauging the Burden of Public Pensions on Cities,” that asks a simple question: “How much do residents of a city pay for pensions—not just for city pensions, but also for school district and county pensions in their jurisdictions?”

To answer the question, the CSLGE researchers used data from 173 cities around the United States, including 10 of Texas’ biggest cities. Their finding was that, across the nation, pension costs average 7.9% of the total revenue base of those cities.

In Texas, our 10 biggest cities are among the bottom half of CSLGE’s 173 city sample, paying the least amount of taxpayer revenue to their pensions. In fact, the pension costs of the ten Texas cities average 4.2% of their tax revenues, nearly a full 50% below the national average. 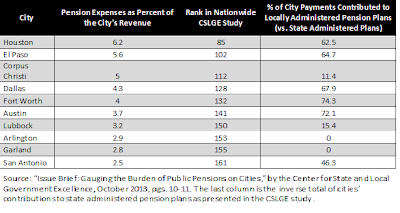 The CSLGE study confirms what we’ve been saying over the years:

1)    Texas’ local pensions do not put their cities at financial risk
2)    Locally administered pension plans do a good job of managing a balance of city employee pension benefits with the city’s overall financial goals
3)    Compared to the statistics of pension systems in other states, Texas is head and shoulders above most, if not all, states on many different measures.

We are very pleased to see this study but we know this alone won’t change the minds of those with a bias against public employee pensions. – Max Patterson

Posted by About TEXPERS at 4:17 PM No comments: