It’s a valid question which is being touted by the Honorable Talmedge Heflin, director of the Center for Fiscal Policy at the Texas Public Policy Foundation, in his opposition to the use of defined benefit plans today. It seems as though Heflin is suggesting that people seeking employment would be more inclined toward 401(k)s and lower compensation:


It would be folly for the state to try to chase private sector pay during an economic boom, said Talmadge Heflin, director of the Center for Fiscal Policy at the conservative Texas Public Policy Foundation.

Instead, Heflin suggested the state try to lure younger workers by creating a portable retirement plan akin to a 401(k) and dispensing with the pension that serves as a "golden handcuff" that has kept older employees on the job. (Why state workers are leaving their jobs,” by Kate Alexander, in the Austin American Statesman, Jan. 23, 2014)

The Deloitte Annual 401(k) Benchmarking Survey for 2012 holds some clues:


1) The last several Deloitte surveys have found private sector employers (PSEs) worried that their employees aren’t saving enough for retirement. “In 2012, plan sponsors reported a continued sense of obligation in preparing employees for retirement. The number of plan sponsors rating retirement readiness of participants as quite important or very important increased to 78% in 2012 from 73% in 2011. This uptick in concern from plan sponsors may signal that they feel participants are trending in the wrong direction with respect to understanding their retirement income needs and saving appropriately.”

Our question is “Why?”

If 401(k)s are so popular with employees, why are they not using them appropriately? If as Heflin asserts that 401(k)s should be viewed as a replacement for “golden handcuff” defined benefit plans, why must PSEs go to such lengths to promote 401(k)s within their organization?


2) Participants’ activity with their 401(k)s is decreasing each year, according to the following chart from the Deloitte study. 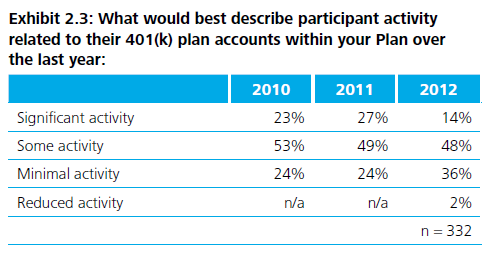 Again, we have some questions.

If 401(k)s are so popular (and a draw to private sector employment), wouldn’t employee involvement increase?

Another statement in the report reflects this skepticism: “Without taking an active role in managing their 401(k) accounts, employees can remain stuck at a low deferral rate and disengaged from investment decisions that impact their retirement savings. With this in mind, plan sponsors are looking to their recordkeepers to help improve plan effectiveness via an overall enhanced participant experience aimed at active engagement.” (As an aside, it seems this sentence is saying that plan sponsors see the need to improve positive results for employees in order to make them less complacent and despairing of their investment results.)

We are going to look for other surveys and research that go more to the heart of Heflin’s assertions.

While the Deloitte study has fairly consistently found that PSEs feel 401(k)s fit their recruitment and retention requirements, the study never asks them any questions comparing their feelings about the use of DB plans for recruitment and retention. And Heflin’s assertion seems to imply the opposite view, that only if DC plans are implemented would more employees gravitate toward lower paying government work.

Of course, as we go looking for more facts, we’d encourage the Honorable Mr. Heflin to offer any proof that “creating a portable retirement plan akin to a 401(k) and dispensing with” golden handcuff pensions would serve the public interest in attracting more employees to replace the outflow of state workers. Somehow we doubt he’d have even an iota of evidence in that regard. – Max Patterson

Posted by About TEXPERS at 9:53 AM No comments: