On Tuesday, the Fort Worth Star-Telegram carried a story noting how the City of Fort Worth will be adjusting its employees’ pension benefits to meet some projected shortfalls. The city’s actions demonstrate the remarkable flexibility that all Texas cities possess when considering funding and meeting their employees’ pension promises.

Not all cities are finding themselves in the same situation as Fort Worth – in fact most Texas cities are not. But when one city has a problem, it’s localized. Other pension systems around the U.S. aren’t built this way, and the negative headlines in the national media pay testimony to their failures. Despite its problems, Ft. Worth took big steps toward recovery this week. They should be applauded for the way they handled it.

The Texas system enabling local control of public employee pensions should be applauded as well. It works. – Max Patterson
Posted by About TEXPERS at 10:06 AM No comments:

Shortly after we hit the “Publish” button on our previous blog we came across a U.S. Government Accountability Office report that offers validation of our statement that “Many public sector employers and employees do not pay into the Social Security system.” We have an update for what “many” means.

The report, “Social Security Administration: Management Oversight Needed to Ensure Accurate Treatment of State and Local Government Employees,” says that 53 percent of public employees in Texas would not have Social Security benefits available to them because they don’t pay into the system during their years of service to municipalities.

The report provides a number of additional background points and factoids that interested public pension observers should know. Here are some introductory excerpts about the federal government’s relationship to Texas’ public employees, present and future:

More recently, Social Security has projected future financial shortfalls in its programs. According to Social Security’s Board of Trustees, the program’s annual surpluses of tax income over expenditures are expected to turn to cash flow deficits this year [2010] before turning positive again in 2012. In addition, all of the accumulated Treasury obligations held by the trust funds are expected to be exhausted by 2037. Once exhausted, annual program revenue will be sufficient to pay only about 78 percent of scheduled benefits in 2037 (and gradually declining to 75 percent by 2084), according to the Social Security trustees’ 2010 intermediate assumptions.

Many options have been proposed to help assure the financial stability of Social Security, among them requiring all newly hired public employees to participate in the program. Although this approach could improve Social Security’s finances at least temporarily and would simplify Social Security as it pertains to public employees, we have previously reported that such a change could also result in increased costs for the affected governments and their employees.[emphasis added.]

On page 11 of the report, the GAO provides the following map summary, showing that Texas is among 5 states who has less than 50 percent of its state and local government employees enrolled in Social Security: 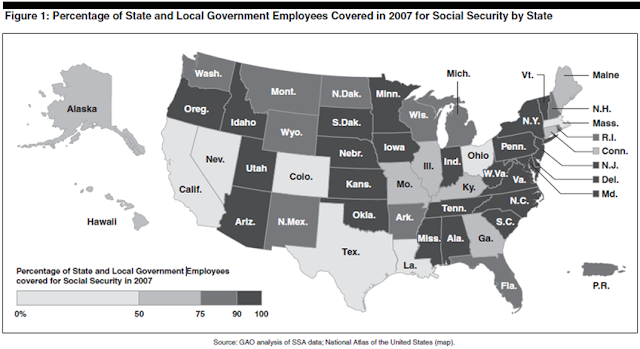 A chart on page 46 of the report goes into more detail about Texas:

There are a number of observations that we will make about this report and the relationship of Social Security/Medicare to Texas’ public employees in future blogs. – Max Patterson
Posted by About TEXPERS at 1:13 PM No comments: